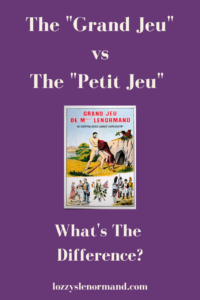 Now, you may be aware that there’s not one but two distinct sets of oracle cards in circulation that bear the name of Mlle Lenormand.

One is the Petit Jeu de Mlle Lenormand, which is what we are mostly talking about when we talk about “Lenormand” these days; the  simple 36 cards I mostly talk about here on this site, and that originated with Hechtel’s Das Spiel Der Hoffnung (Game of Hope) cards at the end of the 18th century.

The other deck you may have heard of is the Grand Jeu de Mlle Lenormand. Which, although both decks/games have been named after the famed fortune-teller herself, is a TOTALLY different set of cards which uses a completely different system and has origins elsewhere and in different traditions.

So in this post, I want to introduce you to the Grand Jeu and highlight the main differences for those of you who are curious. The deck does seem to be out of print or ridiculously expensive in many countries for some reason, especially the US, but is available at a very reasonable price (less than £20!) via Amazon in the UK, and you may well be able to find a copy elsewhere, such as eBay if you’re interested. Click on the image or the link to take a look.

What Is The Grand Jeu de Mlle Lenormand? 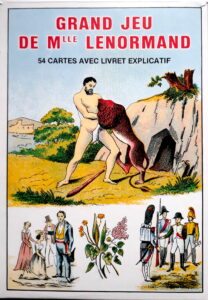 The Grand Jeu de Mlle Lenormand is a deck of 54 oracle cards that bears absolutely no relation either in interpretations or symbolism to the 36 Petit Jeu de Lenormand cards that you’ll be familiar with from this site. So it isn’t just a “bigger version” of the smaller deck; it’s a completely different system.

That said, it is a very interesting, if very complicated, one, and well worth checking out if you’re into oracle decks, and especially if you’re an aficionado of Greek mythology, as the deck is based on that. Other than that, it pretty much has it all, although I should warn you, it is very complex and scholarly rather than intuitive to learn.

What Are The Main Similarities and Differences Between This And  A Petit Lenormand Deck?

Er… that’s it for similarities, pretty much!

Is The Grand Jeu More Authentically Connected With Marie Lenormand Than The Petit Lenormand Deck?

Well, yes and no. We do know that the deck we call Lenormand today, the Petit Lenormand, is actually based primarily on that of Hechtel’s Game of Hope and rebranded using the famous fortune teller’s name in the mid-19th century and thus is unlikely to have had anything whatsoever to do with Marie Lenormand and her methods. Even the so-called “Philippe Lenormand” instructions that were long printed with the decks are likely to be a marketing ploy more than evidence of any direct connection with the lady herself.

It is similarly likely that the Grimaud Grand Jeu Lenormand deck (sample here with instruction booklet from the British Museum) was also given Marie Lenormand’s name for marketing purposes. BUT, although no writings or details of her methods remain, there are contemporaneous as well as fictionalized (and likely exaggerated) accounts of visits to the great lady herself, which suggest her methods involved analysis of multiple elements; playing cards, reference to the classics, astrology, the querent’s preferred flowers, scents and colours.

So although the Grand Jeu is highly unlikely to follow the exact methods and interpretations used by Mlle Lenormand, I’d suggest it is probably rooted more in the idea of her methods, where multiple elements are used, than the Petit Lenormand deck.

To show you what I mean, let’s take a closer look at the detail on the cards. 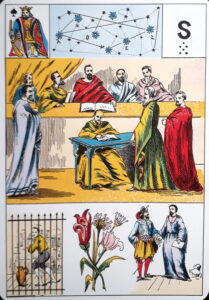 As you’ll see from this sample card from the deck, each card, aside from the two Querent cards, a Man and Woman in the deck, contains several elements:

The booklet that comes with the cards gives interpretations for all of the elements except the astrological one and the letters. (Helpful…)

Using this particular card, the King of Spades, as an example, here’s the sort of  interpretation the elements each card will have (these are based on the booklet printed with the cards)

To demonstrate, I’ll give a very, very simple three card reading that shows how the cards and their images interact. So imagine you have asked: What is coming up for me? And you pull the following three cards. 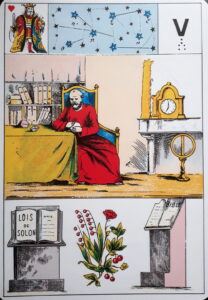 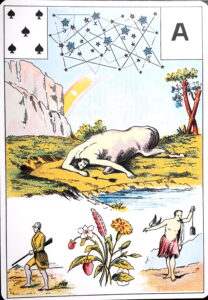 In this case, I’m going to pretty much take a Past-Present-Future reading of these cards. I’m not going to read the letters or constellations, just the images.

The smaller images in the corners influence the MAIN image in the centre of the card they are touching, as follows: 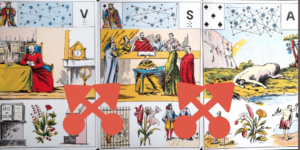 The individual interpretations of each card are:

If I take the left card as broadly the past, the central card as the current situation or main issue facing the Querent and the right hand card broadly as the future of this situation I get:

So our Querent is likely to be involved in a lawsuit, which could be good or bad according to the cards which surround it. On the plus side, the Querent’s background is likely to involve doing good works which may be a positive influence; they appear to be someone of good character. On the minus side, it doesn’t look as though this lawsuit will be successful at first. Perhaps the person is resting on their laurels somewhat?

Past influences in this situation – Left Hand Card

In the past our Querent has been well-advised by someone very wise and positive who advocates taking care in business or professional ventures. But recently, there has been a court summons for a grievous offence. Perhaps this previous good advice has been taken for granted?

There is a strong suggestion of failure here through laziness or not taking the issue of a prospective law suit seriously enough. Do not be lazy in this situation or it is likely to fail unless you can be creative or innovative in approach.

Q: What Is Coming Up For Me?

A: There is a potential lawsuit on the cards, most likely a summons of some kind, which could well be commercial in nature. You are likely to have had very good and careful advice from someone who’s experienced in the past which has been a very positive influence, but do not take your previous good name or that advice for granted and don’t cut corners. Take it seriously; dot all the i’s and cross all the T’s because the signs are, if you allow yourself to be  lazy about this or don’t treat it seriously enough, you’re going to come a cropper.

See how the interpretation works, with the cards influencing each other in important ways? Again, this is a storytelling system, but it is much more complicated to do and far less intuitive than the Petit Lenormand.

I’m not, for now, especially given that the deck appears to be going out of print, intending to go into much more information about the Grand Jeu deck (although I may do some time in the future). There are books available on this deck, although most of them are in French. If you speak/read French though, a couple of comprehensive (although frankly absurdly expensive) examples would be:

Let me know below if you find more English language versions!

2 thoughts on “The Grand Jeu de Mlle Lenormand vs The Petit Jeu: What’s The Difference?”