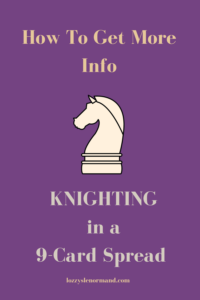 As you’ll be aware, the Grand Tableau is a complex spread, or at least has the potential to be,  with a lot of additional techniques you can use; Houses and Knighting in particular in order to tap more information.

The 9 card spread (or 3×3 or Box spread) is actually a small part of a Grand Tableau, and you can use the techniques you’d use in the smaller reading to further focus on and explore any life area of the GT that you’d like to go more into.

But did you know that even in a small 9 card spread, you can employ some of those Grand Tableau techniques for extra info? You can’t use the Houses technique, obviously, as that requires all 36 cards, but one useful technique you can use is Knighting. I explored this technique in the post Knighting, Mirroring and Reflection in the Grand Tableau, which you can find under the Lenormand Card Layouts tab in the menu. You cannot using the knighting technique in a 3 or 5 card spread.

Reminder: What Is Knighting?

Any given card can be “knighted” (ie influenced in particular by) in a box spread by the cards that are in the ‘knight’ position to it as in a chess game. This is basically two cards away on the same axis (horizontal or vertical) and then one across on the opposite axis.

Here’s an example. If we want to find out even more about Card 1, it is being knighted both by Card 6 (two across, one down), and by Card 8 (two down and one across from it.) 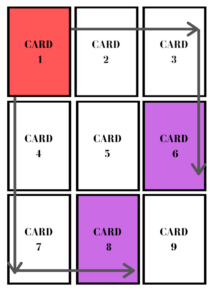 In a 9 card spread, all the cards EXCEPT the centre card can be knighted in this way. So for the rest:

How To Read Knighted Cards

Most of them will be in combination with the card in question, but you can also read the two knighted cards as a pair, but usually only if they are on the same axis.

The question is a current affairs one:

What News Is Coming Up This Week?

First, we’ll follow the step by step approach to reading the rest of the spread as per my instructions for the  9 card spread (or 3×3 or Box spread) here:

Hmm.  Now, I wonder which major headline-hitting international news story this week THIS could be about?! Seems appropriate to be talking about games of chess and “moves”…

Now let’s look at the knighting cards to see if we can get more info.

So to get additional information on this spread, let’s go through each card reading those that knight it.

So, putting it all together into a ‘story’:

What News Is Coming Up This Week?

Main Reading: The news this week centres on an opportunity or chance for someone, which involve multiple or the choice of a conversation or to talk. It’s connected to conversations with someone older, wiser or experienced, a loving older person or a later life romance and talking about a love relationship or in a heartfelt way. The most open part of the opportunity is that it’s for a woman to air or discuss a conflict, or issue a verbal challenge. At heart it is about the chance to make romantic choices, or “choosing love”, but under the surface it is also about financial security and long term wealth perhaps involving older people. There is a long term or permanent conflict in the background to this around choices, including possibly choosing to fight. Now there is the opportunity to talk about older people, and ahead, for a woman to gain wealth and power from a love relationship.

Knighted Cards Additional Info: There appear to have been struggles and fights within the romantic romantic relationship or it may be that it’s been highly sexual. There have also been conflicts with older people. A conversation or discussion becomes ‘permanent’, perhaps long-lasting or fixed, and both financial discussions and financial security or permanent power are part of that. It’s about the woman’s path and choices, and this seems to have something to do with her experiences or with her and someone older in her life, perhaps a man or father figure. The woman’s choices, particularly financial ones, and gaining financial stability, to become a wealthy or powerful woman. Romantic arguments or sex again, as well as romantic longevity and stability through love. Romantic stability, and talking about stability and security, the long term, a permanent conversation. The woman has conflicts and struggle with older people, and she may be harsh or critical. There are options to do with money and power, the road to power and wealth, perhaps, and talking about money.

See just how much info you can get from this relatively small layout?

Why not try it for yourself and see? 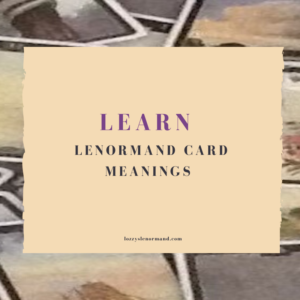