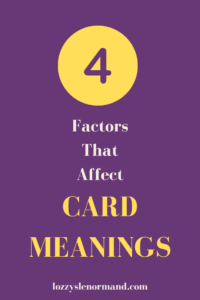 Now, you may be starting to feel you have got to grips with the basic meanings of all the cards.

But when it comes to applying them in readings, what are the main factors that can impact the meanings? And what does this mean for you, the Lenormand reader,  in terms of understanding the Lenormand system and how it works as a whole?

Surrounding Cards In The Spread

Remember in Lenormand, cards aren’t usually read in isolation. They are read in combination with other cards, usually to create a story. (Check out the How To Tell A Story With Lenormand for more on this). As such, you will find that a card’s meaning and strength can be really affected by the other cards around it.

Take this example, using the card the Whip.

Now, we know the Whip card generally refers to conflict, things rubbing up against each other (that’s one reason why it’s commonly used for sex!) discipline, abuse, harshness. So generally a negative card, yes? But is it always totally negative?

For instance, how negative a card would you say the Whip is in each of the following readings? Does its meaning alter at all depending on the surrounding cards?

Here, the Whip does have an entirely negative meaning. It is surrounded by two other negative cards, the Mice, meaning worry and stress, and the Cross showing burdens, life tests, pressure. The Whip here suggests being assailed, bashed about, given a hard time (a literal “whipping”) by pressure and stress.

In this reading, one of the cards, the Birds, is neutral, and the other negative. Again, in this reading, the Whip‘s meaning is pretty negative. This time, the Birds makes it clear that the conflict involved in the Whip is verbal. This is about arguments, criticisms and the uncertainty and sense of gloom (Clouds) that follow in their wake.

In this reading, although the Mountain is another generally negative card, the Whip carries a more positive meaning, because it is being influenced by the Bouquet which suggests positivity, blessings, a prize. The Whip here indicates effort and struggle being made to get over an obstacle (Mountain) resulting in something good, a blessing, perhaps something pleasurable (Bouquet). Overall, the struggle indicated by the Whip is a positive one that has had positive results.

Similarly, here the Whip is paired with a positive card, the Sun, and a neutral card, the Book, meaning learning, knowledge, secrets. Again, the Whip suggests effort, in this case, perhaps tough learning, a hard lesson, training after which victory and success is assured (Sun). So sometimes, the cards will tell you that even a negative-seeming card is a necessity.

You can find out more about negative cards and whether they can have more positive meanings in the post Can Negative Cards Ever Have Positive Meanings?

Position In The Spread

I talked about this a little bit in the post Lenormand Combinations: Why Card Order Matters, but the position a card has in a spread does have an impact on the meaning. Is it the main card or an influencer, for instance? Is it moving out of the situation or is it coming up ahead? In a Grand Tableau, is it one of the cards surrounding the Querent, indicating its influence is of major importance, or is it far away?

How does the card position impact its meaning or strength in the following spreads?

So, exactly as above, the Whip carries a relatively positive meaning, because it is being influenced by the Bouquet which suggests positivity, blessings, a prize. The Whip here indicates effort and struggle being made to get over an obstacle (Mountain) resulting in something good, a blessing, perhaps something pleasurable (Bouquet). Overall, the struggle indicated by the Whip is a positive one that has had positive results.

The same three cards but in a different order. This indicates that perhaps the pleasures (Bouquet) are being delayed or obstructed by the Mountain and that this will prove difficult or tough to get past (Whip). Here, we can’t see whether or not any efforts made will be positive, just that there is a challenge ahead to try to get past the obstacle, so it gives the Whip a more negative meaning.

Again, the same cards in a completely different order, and again, it makes the meanings and overall sense of the cards quite different. Here, we start with the Whip which is given a positive sheen by the Bouquet, which speaks of pleasures. “A pleasurable conflict or effort.” This could make the Whip something sexual, for instance, or have an addictive quality to it. Both of these cards being followed by the Mountain then suggest that this sense of pleasure either stops or there is an obstacle to get over, that any pleasure takes time to achieve.

So do you see how much the order impacts the meaning of the overall reading?

I’ve recently been doing a series of posts on cards in different contexts (such as Money, Love and Personal Development) which I hope has given you some ideas but here are some examples of how the essence of the Whip may manifest in different contexts and situations. You can see some of the main ones on the Whip card meanings page, but here, I’ve put the card with others too, so you can see the contexts more clearly.

A Person In a Love Context

In this example, you again have the Whip appearing with the very positive Bouquet in the love context shown by the Heart, which would suggest the Man in question may be quite a sexually attractive individual, someone with ‘something’ about him that jolts in some positive way.

The Whip In a Love Relationship Context

Here, you’ve got the Whip as well as the Scythe, both negative cards, in a relationship context. Paired with the Birds, the Whip here is related to arguments in a love relationship (Heart) which is painful or in the process of breaking (Scythe)

A Person In A  Business Context

Here, the Whip may suggest conflict in the sense of rivalry in the business sense. The Fish represents business, the Whip, conflict and the Man a person, so this could be a business rival, someone you are in competition with.

The Whip in an Educational Context

Here, the Whip is paired with knowledge and learning (Book) as well as the Child, which suggests someone learning, a student, young or inexperienced person. With its emphasis on discipline and effort the Whip carries a strong element of training in it here.

The Whip in a Health & Wellbeing Context

A different kind of training is involved here, with the Whip paired with the Bear, representing power and physical strength, and the Bear in turn being paired with the Tree, for health and vitality. This strongly suggests sports training, physical or endurance training.

Do you see why the context you are reading in makes such a difference to the interpretation? You can find out more in the post Why Context Is Important In Lenormand Readings

The Question You Ask

Finally, always be sure to relate the card’s meaning back to the question you ask as that will have an impact. Consider how the Whip card would differ slightly in meaning if it showed up in answer to the following questions. (Note too, however, how the underlying essence of the meaning remains the same.)

I hope this post helps to illuminate some of the key things to understand when you’re starting to apply Lenormand card meanings to your readings. Although the underlying essence of the card will remain the same regardless, the way you use the cards, and how the Lenormand reading system works generally leads to all the subtle nuances and seeming variations in meaning you can see in actual readings. Remember, Lenormand is a language and a storytelling system. The cards do not generally exist in isolation. The meanings will be impacted by the following factors:

To get the most from the system and the meanings, you’ll need to incorporate all four elements into your understanding of the cards and how they work. 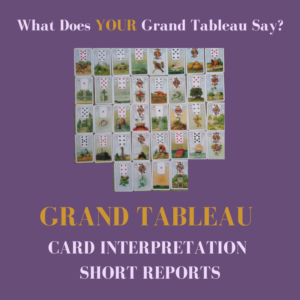