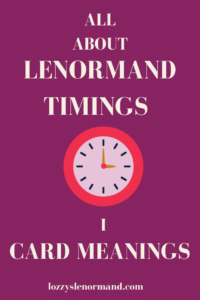 A lot of my readers have been asking about Lenormand Timings, so I wanted to give a bit more guidance.

I should say that, generally speaking, I don’t personally tend to use timings much, mainly because I don’t entirely believe in fixed futures and don’t like to limit possibilities that severely. If I’m interested in restricting my reading to a particular time period, I tend to put it into the question e.g. “What are the biggest influences coming up in the next three months?” kind of thing instead.

Nonetheless, I know many of you feel differently, so I will give you the info and leave it up to you as to whether you choose to use it or not, as well as give you some ways that you might like to experiment with in practice.

It’s also worth pointing out that there’s more than one ‘official’ method of reading the card timings, and it is not as simple as it may at first appear, so please bear this in mind, experiment, and if you choose to do so, see what works for you.

So first off, which cards are we talking about? Do all of the cards have a possible timing meaning or not?

There are three main ways you can use the cards for timing in terms of individual card meanings:

You are unlikely to find the last on many ‘lists’ but in my view, one of the best and most useful ways to indicate timings, rather than exact dates and times, is in the context of ‘events’ told by the cards combined. I’ll be covering this in more detail in my next post.

Ship     Three. March, Three Weeks, Days, Months, Third of the Month, On a Trip or While On the Move

Tree  Five. May. Five Days, Weeks, Months. Fifth of the Month, When All Is Green

Child  Thirteen Days, Weeks, Months. Thirteenth of the Month, When New To Something, In Childhood

Stars: Sixteen Days, Sixteenth of the Month, A Clear Night, At Night

Storks: Seventeen Days, Weeks, Seventeenth of the Month, Change of Season, During Change

Dog: Eighteen Days, Eighteenth Day of the Month, With Friends

Tower: Nineteen Days, Weeks, Nineteenth of the Month, In a Building or Official Place

Crossroads: Twenty-two days, weeks, twenty-second of the month, When a choice is presented

Heart Twenty-Four Days, Twenty-Fourth, Summer, During a Romance or when in love

Woman Twenty-Nine days or the Twenty-Ninth of the month

Moon Lunar Cycle, Tidal, Evening, At Night. In your dreams.

So how might you use timings in a reading?

Like a lot of Lenormand, how you use the cards with regard to timing is fairly flexible; there are no set rules, but there’s a range of ways you can do it to best effect.. Some options include pulling a single card or cards to answer the specific “When will…?” question, to using the playing card pips (again!) attached to a reading you’re already doing, giving the likely series of events in a series of cards more like in a story. I’ll be covering some of the How-Tos in my next blog post.

As well as doing personal readings, I can also help you interpret your very own readings: your own layouts you’ve done with your own cards.  If you’d like some help, please see my service pages here for how to order.  You can check out samples of some reports here: