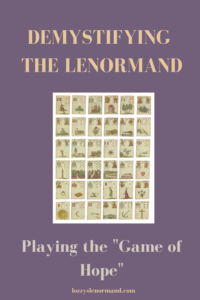 Curious as to what Johann Hechtel’s 1799 Das Spiel der Hofnung or Game of Hope parlour game, which the Lenormand cards are based on, actually entailed? As a reminder, here is a link to the copy of the game along with its instructions that is held at the British Museum, so you can see what it looked like.

Worth remembering, too, that the name of Lenormand was only added to Hechtel’s game cards AFTER the death of the celebrated French fortune-teller and cartomancer Marie Anne Lenormand, mainly to riff off her famous name and market the cards as a purely fortune telling deck.

I’m not going to reproduce the literal translation from the German here, but in a nutshell, this is the parlour game, adapted Lozzy-and-irreverant-UK style (and apologies to Hechtel, obviously. Don’t take my version of the interpretations seriously, I’ve made them humorous and silly on purpose, but hopefully, you get the picture). The original is even more basic and aligned to 18th century German culture, but the ‘moves’ are the same. My aim here, though, is to further demystify the Lenormand cards, along with the system and their origins. 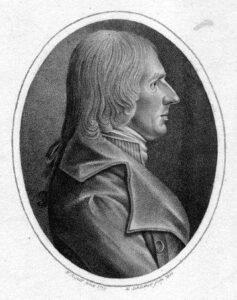 The use of the cards for the parlour game version has nothing whatsoever to do with fortune telling BUT Hechtel (left) did give instructions re: a fortune telling use of the cards as an alternative. See the section at the bottom of this post. He also said that players could adapt their game play however they want to include extra forfeits and rewards for different cards and so on.

What I hope this illustrates for any would-be Lenormand reader is:

How To Play The Game, Lozzy-Style (With Apologies To Hechtel)

If you land on:

The Ship: You’ve won a prize holiday to a tropical island! Huzzah! Move forward to the Birds.

The House: You want to visit the stately home where Downton was filmed, but have to pay to enter! (National Trust, pfft.) Pay 2 tokens into the pot

The Clouds: What rubbish weather! That’ll teach you to come to the UK on holiday. Go back to the Clover and wait for better luck to come.

The Snake. A giant python has escaped from the local zoo and you find it curled up in YOUR back garden eyeing you and your pets hungrily. Cough up 3 tokens to get that weird bloke with the black eyeliner who reckons he’s  some kind of Snake Whisperer to come and deal with it for you

The Coffin. Oops! Bitten by a zombie at the bus stop (hey, it can happen to anyone). Remain undead and unable to move from this spot until another player arrives with an antidote OR your feeble zombie hands manage to roll a double on the next turn.

The Whip. You’re being hassled by the UK paparazzi and castigated daily by Piers Morgan on Good Morning Britain. Pay him to shut up with two tokens into the pot and also remind him you have a child. Move to the Child card to make your point.

The Fox  You fool! You believed your sneaky estate agent’s sob story about the landlord being furloughed and now he’s taken back your house and kicked you out. You’ve got no option but to go sleep in the woods. Go back to the Tree until the next turn.

The Star Hurray! You become a YouTube celebrity and everyone’s clamouring to hear from you. Collect 6 tokens for press interviews.

The Tower: “Only the elite A-list allowed into our rooftop bar, mate.” Want that exclusive view across the city, you’ll have to pay for it. That’ll be 2 tokens, please.

The Mountain. Yes, because deciding to climb Ben Nevis by yourself in only your beachwear and a pair of flip-flops because the sun came out for five minutes was SUCH a good idea. Now you’re stuck, alone and your mobile’s got no signal. You’ll have to stay here until another player shows up to raise the alarm or your frostbitten hands manage to throw a double.

Crossroads Ooh, look. Someone once lent you The Road Less Travelled, and now, here the road literally is, hiding behind the mountain! Follow it back all the way to the Garden.

Heart Love is in the air! If you land here, move straight to the card of the one you most desire, whether it be the Man or the Woman

Ring  Ok, Frodo. You got it. All that metal detecting in England’s green and pleasant land’s finally paid off, and you’ve uncovered the (precioussssss) treasure. As a reward, take 3 tokens, so the V&A Museum can take that ancient Saxon hoard off your hands.

Book. Book of secrets? Book of spells, more like. This is what happens when you read UK tabloids . Alas, you’re cursed. Move back to the Garden.

Letter. You never get something for nothing in this place. Want next-day delivery? You’ll have to pay the Royal Mail postal service pot 2 tokens to have your mail delivered or it’ll end up “disappearing.”

Man. Unless you got here through love and the Heart, success and hope is yours! Move forward to the Sun.

Woman. Unless you got here through love and the Heart, the world of feeling and intuition is yours! Move forward to the Moon.

Key. Your destiny here is to receive a minor prize of 2 tokens.

Anchor. WHOO-HOO! Landing exactly on this card of stability and hope, you WIN. Yep, you’ve won the whole game and the lottery!.The entire money pot is YOURS!!

Cross. You blew it. Oh dear. Stay here and feel massively sorry for yourself until someone shows up to take the burden off you or you throw a double.

What if your number takes you over the 36? You have to count back once you get there. So if you’re on Card 34 and you roll a 7, you’ll end up back at Card 31, the Sun. You do not win the money pot lottery if you land on the Anchor by counting back. Tough, I know. Them’s the breaks.

And that’s it,  in a nutshell. So as you see, the game itself is pretty basic, and you can make and adapt to your own version, as long as you follow the basic moves of the game.

OK, So What Did Hechtel’s Game Instructions Say About The Fortune Telling Part?

An alternative to the parlour game use of the cards, again for entertainment purposes, was to shuffle the cards and arrange them in four rows of eight with four cards at the bottom.

You then look for the Man card, if the questioner is a man or the Woman card if it’s a woman.The only instruction Hechtel gives, though, re: how to actually read them is:

To  spin a story from the cards immediately around the querent, for entertainment purposes.

Yep, that’s it in a nutshell. No “rules”on how to do this, no details, no particular belief system underpinning it. All that stuff came in later, cribbed from various cartomancy traditions and people’s practice with the cards.

So Lenormand itself is a bit of a hybrid system, which is worth remembering if you’re seeking “the one and only true way” of reading the cards. It’s a ‘system’ or tradition that’s really been built from people themselves actively using these particular cards and working out what seems to work for them. And again, can you see why the Lenormand cards themselves tend to work primarily in a storytelling way? The cards themselves, I would say, are really simply tools, using familiar, universal symbols, in order to be able to weave  meaningful tales about the truths that lie below.

For a FREE card combinations PDF E-Book,  sign up to my mailing list for weekly email newsletters and other freebies (be sure to check ALL your mailboxes to pick it up! And mark me as a safe sender if you don’t want to miss out on stuff.)  If you don’t want to sign up to get emails, it’s also available in both paperback and ebook format from Amazon as well as other ebook platforms.

2 thoughts on “Demystifying The Lenormand: Playing the Game Of Hope”