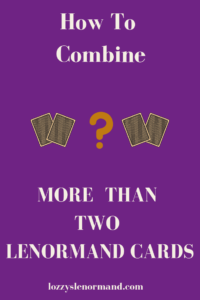 “I understand how to combine two cards, but how do you combine more than two in a reading?”

This same question  has come up from my readers on so many occasions now that I wanted to give a bit more information on HOW to approach the issue of combining more than two cards when you’re doing readings.

I’ve already covered some of this in the post about building a story with Lenormand in terms of context and question, but because so many people still clearly find it an issue, I’m going to take a different angle and look at it more in terms of the mechanics. In other words, how you might come up with LONGER basic meanings and sentences yourself while doing the main layouts.

One thing does need reiterating though:

MOST Lenormand readings are based on PAIRS of cards

First of all, MOST Lenormand interpretations are based on reading pairs of cards and then linking those combined meanings together: this includes within longer readings in 3-card, 5-card, 9-card AND the Grand Tableau.

You can read cards individually in chains, too, but you’ll find that you’ll get the most detailed information  from linking the pairs of cards into sentences, and then those meanings into bigger and bigger paragraphs.

To illustrate this in action, let’s build an example, step by step. Imagine we were building a reading, starting with a single card.

So this reading has something to do with a marriage, commitment or deal.

(Chain): A man and his marriage or commitment

Now we have another card in the mix, the Woman.

So we already have: A man and his marriage or commitment/A married or committed man

If we just read the three cards individually in a chain to connect them, we now have, at the most basic level (given we don’t know the context or question):

However, as we know from the 3-Card Spread, and given this is one, we can also read all the cards in combination/pairs as follows using the Noun + Adj method:

Now it’s up to us to put all that into a sentence or paragraph that makes sense:

So now another card gets added to the above, which will give us another snippet of information.

So now we have a Crossroads card, meaning Choices, Options or Pathways added to the mix.

There isn’t a “Lenormand 4-Card Reading” as such, but we can use reading the cards in a chain along with all the various card combinations to get what information this gives us.

Chain: Options (Crossroads) for a man (Man) relating to a marriage or promise (Ring) with a Woman (Woman)

Additional combos we can do for more about this Crossroads card:

All The Cards So Far With Combos: A married or committed man with options or choices between himself and a woman commitment, marriage or agreement with a woman who also has options about the commitment.

Now, we’re into more familiar territory with a 5-Card Spread and we have the final card, the Letter.

So as above, the centre of this reading is the Ring and the relationship or commitment between the man and woman.

Our new card, the Letter relates to news, documents and writing

Chain of individual cards: Options (Crossroads) for a man (Man) relating to a marriage or promise (Ring) with a Woman (Woman) regarding something written (Letter)

At the core of the reading is: A married or committed man and a woman’s marriage or commitment; this couple and their commitment

Putting all the combinations together in a chain from left to right, we have:

Plus our new combination:

So putting all of that jigsaw together, we have something like:

A married or committed man with options or choices about the commitment between himself and a woman , perhaps a journalist or writer, who also has options about her commitment or the marriage between them and possibly how to write about them

Do you see how each time you add a card, it impacts the whole reading by adding additional information? And also how most of the reading is made up of pulling the meanings of different PAIRS of cards together?

What Else Affects the Interpretation of A Group of Cards?

Two other aspects, in the main:

For a FREE card combinations PDF E-Book,  sign up to my mailing list for weekly newsletters and other freebies. This ebook is also available to buy for Kindle, mobile, tablet as well as being now in printed paperbook format from Amazon.

Complete Guide to Lenormand e-book, available from Amazon, Nook, Barnes & Noble, Apple Books & other ebook platforms. Soon to be available in printed paperback format and here as a PDF.

Check out my Career Readings and Love Readings workbooks to practice readings in context.

Or head to the Shop for other goodies. More stuff coming soon!