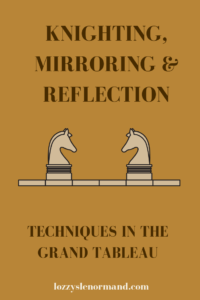 Following on from my previous post – The Lenormand Houses & How To Use Them –  I wanted to add to that with a bit more detail about the other main techniques you can use to get even more information from a Grand Tableau reading, and show you some examples.  The three techniques I’m going to focus on are Mirroring (which can be used in other layouts as well, so you’re likely to be familiar with this already), Reflection, and Knighting, which is the most complicated of the three.

As before, these should just be seen as additional tools you might choose to use when doing a Grand Tableau. They’re not compulsory but are really good to know about as they can yield additional interesting information

All three techniques require you to have a particular card you’re focusing in on. So, for example, you might just want to have a look in more depth at your Querent card, or the card for another area of life, such as your Love Life (Heart)  Problems (Snake), or your Career (Fox), wherever it falls on the spread. It’s great for digging even deeper and getting even more  juice than you already have by using it as the focus card in a 9 card spread.

The (usually) two cards that mirror your focus card on the horizontal and vertical axis.

The ONE card that is in the exactly reflected position from your focus card. Card 1 is always reflected by Card 36, Card 2 by Card 35, Card 3 by Card 34 and so on, all the way through the layout.

The cards that are in the Knight position (from chess) away from your focus card. This is two places away from your card and then one along on the opposite axis.

Bear in mind that, depending on the positioning of your focus card, you won’t always necessarily have the same number of cards to play with here.

Since it’s easier to show visually, let’s take a look at them in a spread.

An Example Spread with the Woman card as the focus

In the spread below, I’ve highlighted them in colours as follows:

You will notice that the Stars card in this layout in falling in both the Reflected AND a Knighting position, hence the two colours. This is fine; it just perhaps gives that card a little more energy.

How To Read Them

So, imagine I am focusing on my Woman card in the above spread, and want to find out more.

You can, of course, just take a look at them individually. We can see from the above that our querent is being mirrored by the some kind of establishment (Tower) and New beginnings (Storks) cards, reflected by hopes and dreams (Stars) and knighted by her social life (Garden), hopes & dreams again (Stars), Work/Career (Fox), Agreements or promises (Ring), Communication or talks (Birds,) and Success (Sun).

Looking at them in a bit more depth:

In this example, my Reflecting card is the Stars, and I’m focusing on the Woman card, so I’d read it pretty much like any other combination:

Woman + Stars = My querent is feeling hopeful or ambitious

Again, I would use the mirrored cards to give me more information about the card that they mirror, in this case, The Woman. In this case, she is being mirrored by the Tower and the Storks

Woman + Tower = My querent has made something ‘official’ in some way, or has become established.

Woman + Storks = My querent is making a fresh start.

I generally tend to treat them as ‘vibratory’, in much the same way as the House cards, and primarily in relation to the focus card I’m looking at. So again, we have:

Woman + Garden: My querent is feeling sociable and outgoing

Woman + Stars: She is hopeful and thinking about her ambitions, hopes and dreams, or she is a high achiever

Woman + Fox:  Her survival, work life & how she puts food on the table is a focus

Woman + Ring: This may represent her as a married woman, or it may involve a promise or agreement she has made.

Woman + Birds:  She is talkative and communicative

Woman + Sun: This shows her as successful, positive and happy

You’re not obliged to , but you can pair her knighted cards with each other too for even more information, for example:

Fox + Ring = Some sort of work agreement or promise or deal

In addition, we of course also have the information that, if you look at her Houses, she is appearing in the 15 Bear House position. So there’s an air of financial security, money, power and wealth about her too.

As you can see, that is a HUGE amount of additional information we’re getting just about that one card. And that’s even without the basic the steps we can do in the Grand Tableau where we will find out more.

So How Do We Put All That Together Into a Story?

Depending on how we have chosen to do our reading, we can now put that information together and tell a bit of a story about just that card (and you can take a look “How To Tell A Story With Lenormand” for more guidance on general story guidance.)

Remember, we are doing all this to give us more information about my querent in this case, so we should bear that context in mind when we are telling this part of the story. I would suggest something like:

Q: What additional information have we found about our Querent in this reading?

A:  The cards  show financial security & protection as a priority for her (House of the Bear), that she has made a fresh start and that this is a hopeful and ambitious time, with her perhaps establishing herself officially. (Reflecting & Mirrored Cards). She has been out and about in the world and may well be networking, highly successfully, with high achievers, and may well be achieving some of her dreams herself. This could be around her work life and involve a deal or agreement of some sort. Big social occasions, networking events or even award ceremonies are likely and her success is well-starred. (Knighting Cards).

How Many Cards In Our GT Should We Do This For?

You can do this for every single one of them if you wish! Although it is time consuming.

Personally would just do it for any card that I wanted a lot more detail and information about. For some people, this will just be the main life-areas. For others they may want to find out more about a person or particular situation in the reading, or dig deeper into an area of particular interest. Up to you.

As we’ve said previously, the great thing about The Grand Tableau is –  may be large – but it is flexible, and you can be as detailed or “big picture” as you wish with it. It also holds massive amounts of detail and can reveal a lot of secrets!

6 thoughts on “Knighting, Mirroring & Reflection Techniques In The Grand Tableau”