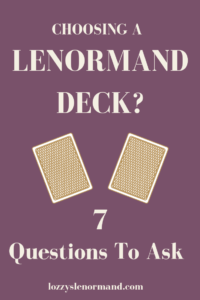 There are loads of Lenormand decks currently on the market, and new ones being created all the time. This includes the standard or most popular decks, which are widely available (see my Ten of The Best Lenormand Decks post) as well as a range of decks created by artists which can be highly individual and often very beautiful, although often a bit more pricey. (You could also make your own, but that’s a subject for another post.)

Different readers may want different things from their cards.  I’ve obviously got my own opinions and preferences with regard to decks but I wanted to take a look at the questions that all readers should be asking in order to choose the best Lenormand deck for themselves.

1. Are The Central Images Clear?

This is the number one consideration for me, and the key, really, to what the Lenormand system is and isn’t. Lenormand is not like the Tarot, and the deck you choose to use should never change the meaning of the core underlying symbols in any way. The fundamental meaning of each Lenormand card should be the same from deck to deck. Thus, a Clover card means “Luck” regardless of whether it be a simple drawing of a 4 leaf clover, a computer-generated graphic, a beautifully designed piece of artwork including a whole field of clovers, the flower or the leaves, someone holding a clover, or even just a plain print of the word itself.

Bear in mind that NO additional images that may appear in the card will ever have any bearing on that underlying meaning, and they would be completely irrelevant to it. Thus, a picture of a Snake wrapped around a tree is still the Snake card. The tree has no relevance and should not be included in the interpretation. A picture of a House at the end of a long winding path and with a lush garden is just a House; the rest has no relevance for that particular card.

So being the case, whatever you choose, it’s important that it’s very quickly clear to you as reader exactly what that card represents. Personally, I prefer uncluttered cards which ONLY show the core image, large and centred, and that don’t distract me with additional imagery. I would strongly suggest the same for beginners to avoid any confusion. There are certain cards in the deck that SOME readers prefer to see nuance in (for example, the directions that the symbol is facing, light and dark sides on a picture of a cloud) and if that is you, then you might like to consider those when choosing the images. But again, it’s not something I see as relevant to the core meanings, and I think is  more of an attempt to take a more Tarot-esque approach to a system that, in my view, is completely different.

2. Do I Want A Traditional or Modern Design?

This is one consideration that really is down to personal preference, I think, and often down to your relationship with the cards, and how superstitious you tend to be around authenticity.

Many readers feel that a traditional-style deck with 18th century imagery and insets is more authentic and “proper” and helps brings them closer to the tradition of the cards themselves and their beginnings; other readers don’t factor that in at all, finding that it’s the core underlying meanings that connect them to the cards. Again, this would be down to whatever works best for you,  how you best connect with the cards and what best prompts your intuition. Neither  traditional or modern is inherently better, in my view, except that some modern decks can be too cluttered and attempt to add meanings and nuance that aren’t really what the cards are about. So I am halfway between a modernist and a traditionalist on this, really.

One thing I would say is that given I see the Lenormand as a system of core and universal underlying meanings , I personally think the Lenormand system stands pretty well as is and does not generally require new interpretations or “nuanced” additions. I tend in particular not to go for “new guru” versions which are really adaptations of the fundamental system, or even sometimes an attempt at creating a whole new system which is seen as “better.”  So just as I would always go only for simplicity in the core symbols, I would also always only stick with the fundamentals. But that’s just me.

3. Is The Beauty Or Design Of The Artwork Important To Me?

Similar to the question about traditional or modern designs, if you are of an artistic or creative bent, you may find that a particular style or design draws you “into” the cards a lot more, and makes connecting with their meanings easier. You will see that there is a whole range of possible styles and designs. I prefer things to be bold yet simple, although I also love colourful cards. I also happen to be a fan of art deco and early 20th century design, so I do tend to go for that kind of look in the decks I choose.

But again, these kind of preferences are up to you.  I would always choose something that “feels like me,” if you see what I mean, but always with the need for those core card meanings at the forefront.

4. How Many Cards Are There In The Deck?

A traditional Lenormand deck has 36 cards, including one Man and one Woman card.

Decks which have more than 36 cards tend to be:

Personally, I’m happy with only the 36 card meanings in a standard deck, although I can understand the need for additional people cards occasionally, and certainly in situations where the supposed “Querent” cards aren’t all that relatable to the reader. Again, though, this is personal preference. Bear in mind that for all decks with additional cards other than people, it is ONLY those decks that those cards appear in and you won’t find them elsewhere. In most decks, these are optional. I’d suggest using these additional optional cards only if you genuinely feel there are giant gaps in the information you are getting from the standard deck and find yourself wishing for extra.

5. Do The Cards Include Playing Card Inserts, and Do I Need Them?

Most of the more traditional decks include playing card inserts. I personally tend to see them as a design feature rather than hugely important to the meanings themselves, as these often do not correspond to playing card meanings in traditional cartomancy. So I don’t feel that they are necessary or a core part of the Lenormand system, and I have never used the cards this way.

Some readers do however find they get additional nuanced meanings from the playing card references, the court cards, and suits. I don’t, myself: as you know, I prefer to focus entirely on the core meaning of the card’s primary symbol and I think that’s where the strength of Lenormand lies.  However, if the playing card inserts do have meaning for you, you will need to pick a deck that does have them.

6. Do The Cards Contain Other Information e.g. interpretation inserts?

Some decks include interpretative notes, either with basic card meanings or, as in the case of the more traditional Blue Bird Lenormand, for instance, descriptive verses. So depending on you & your confidence with the card meanings, you may find these either a help or a hindrance.

I would say if you are forever flicking from list to list, and are not yet confident about card meanings, it might be helpful for you to have them as an aide-memoire. I think the descriptive verses are a nice traditional touch, but again, would still prefer to focus for myself on the underlying meanings of the card symbols rather than have them written there.

7. How Large Are The Cards?

Depending on the layouts you tend to do most often, the size of the cards can be a consideration. I personally prefer to choose decks that are more or less normal playing-card size: some decks, although lovely, are much, much, larger and thus more difficult to handle. If you tend to do Grand Tableaus quite frequently, it is probably better to choose a smaller deck, as otherwise you’re going to need a lot of space!

Don’t forget to check out my post on the 10 of The Best Lenormand Decks here.

When thinking about choosing the best Lenormand Deck for you, it’s worth considering the  following:

Want more info and guidance on Lenormand in general? Check out my Lenormand Tips page for answers to some common questions and issues, or why not sign up to my mailing list for a FREE downloadable Card Combinations e-book, my regular newsletter, tips and exclusive subscriber-only freebies!