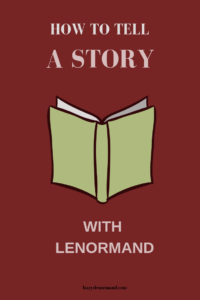 One question I’ve been asked quite a bit with regard to readings is how you link the separate card meanings and combinations into a coherent narrative or story, rather than just a list of meanings.

So to answer this question, let’s start by imagining you have a simple three card spread, as follows:

When you’re reading these cards, how do you weave those meanings into a meaningful sentence or paragraph so it all makes sense?

The First Question To Ask Is—Should You? Do You Need To?

It is not always necessary to force the cards into a narrative, especially when you’re doing readings for yourself as I did back in my three-cards daily journaling post.

Sometimes, especially if you have left the context a bit open or general, and are just being broadly predictive, there’s a chance that you might miss out on something vital if you try to impose too much of a narrative structure on it all. Almost as if you’re trying to make it mean something it might not.

Most of the time though, and particularly when you have a specific question or are reading for friends and family, it will help to give the cards extra meaning. Lenormand is a story-telling system, after all.

So How Can You Do It?

Well, given Lenormand is a language, there’s a bit of an art to it, and yes, it involves some creative thinking and storytelling skills, and as we’ve said previously, the need to think intuitively about all the meanings too.

Remember, you are building the story of the cards from four main elements:

So let’s take a look at the same three cards in different situations, with different questions, and see how we might weave narratives out of each.

Imagine you pull the following three cards for someone (deciding that it’s going to be a card combination reading not a past-present-future) and the question is simply:

What’s Coming Up For Me This Week?

So we have our three cards and we know their basic meanings. We don’t have a context, though, and it’s just a very general question, so we’re going to have to go with general meanings about travel and transport when we do this reading.

First, we look at the meanings individually:

Snake = a problem or betrayal of some sort

If you just read these in a line as if they were words in sentence, you could get something like:

Now, we look at the cards in combination:

If we take the Ship as the keycard, and combine the mirrored Cards 1+3 around it, we get

Ship = A journey or trip at the centre of the reading, which is surrounded by

Worth thinking a bit about this one. Travel problems in general  are easy to define and pretty common in day to day life but we don’t have a context here at all. In particular, what kinds of journeys might be ‘agreed or contracted’? Perhaps it is just a trip that has been pre-arranged or pre-booked? If that agreement is ‘betrayed’ might that indicate a cancelled trip?

Could be. That makes sense. Okay, so:

Now we tie it all together in answer to our question:

Q: What’s Coming Up For Me This Week?

A:  A problem of some kind on an agreed or arranged journey. It’s likely that travel plans and arrangements you’ve made will be disrupted in some way or an expected trip that’s been arranged will be cancelled.

Do you see now why context and question can be so important? In the above example, we have no choice but to use the most general day to day and basic meanings for the cards that we can.

Now let’s see what happens when we use the same three cards but with different questions and in different, more specific contexts.

Your friend Jenny is worried about her finances and wants to know if there’s anything she needs to know in relation to that in the near future.

What Does Jenny Need To Know About What’s Coming Up With Her Finances?

This time, we know the context, so we can look at the cards in terms of that.

Snake = a problem or betrayal of some sort

Ship =  something moving, transport or travel. In the money context, this can also mean a transfer.

Ring = agreement, committed relationship, deal or promise. As this means ‘bond’ it can also mean a payment.

So now we have our previous meaning but can give it a financial context.

Ship = A trip movement or transfer, which is surrounded by

So there are a few possibilities here, really, with the Ship in the finance context. Either Jenny won’t get a payment she’s been expecting OR she’ll have to pay for something she can’t get out of and that will cause her problems.

Q: What Does Jenny Need To Know About What’s Coming Up With Her Finances?

A:  A problem of some kind on an agreed or arranged payment. Either Jenny won’t get a payment she’s been expecting or she’ll have to pay for something she can’t get out of and that will cause her problems.

Which one? I would leave that to Jenny and not impose it unless she gives you more information that clarifies the situation

Martin’s been offered a job that involves a lot of travel. In deciding whether or not to take it, he wants to know more about the offer.

What Should Martin Know About The New Job He’s Been Offered?

So now we’re in the career context with these meanings

Snake = A problem or betrayal of some sort, something not to be trusted.

Ship =  Travel. Transfer, movement, move (So the travel aspect of the job is key.)

So reading the cards in Martin’s context, we get.

Ship = The work travel surrounded by

Martin needs to think about what he’d be signing up to here. The Snake card indicates there is something amiss with both the travel and the agreement. The cards don’t tell us what, but in the context it could be anything from unreasonable expectations of what is expected of him travel-wise, from a difficult commute, to who pays for travel,

Q: What Should Martin Know About The New Job He’s Been Offered?

A: That there is a problem with the travel that is part of the contract. Martin needs to dig a little bit more into exactly what he’d be signing up to and check the small print before signing up to anything.

Sarah’s been having trouble with her boyfriend since he’s been away on a stag weekend. She  wants to find out more.

What’s Going On With Sarah’s Boyfriend?

So now we’re in the love and person description context. Sarah is asking about a specific person so we need to think about the person-related meanings with this.

Snake = A problem or betrayal of some sort, someone not to be trusted. Other woman?

Ship =  Travel. Traveller. Someone from overseas? Holiday? This’ll be the stag weekend.

So reading the cards in Sarah’s context, we get.

Again, it depends on what you know about Sarah and her boyfriend so be careful about jumping to conclusions or being too definitive with any accusations. Either it’s the most obvious explanation – he’s cheated on her on the trip OR the trip itself has done something to cause him to question their commitment. Maybe him going at all caused problems between them.

A:  The trip has caused a problem with his commitment. He may have cheated on her, or the trip itself may have caused problems in their relationship. Sarah needs to do some digging: but the problem definitely has something to do with the stag weekend. She should focus on finding out more about what happened on the trip.

The key to connecting the card meanings into a story is to build it using your knowledge of four main elements:

You can see more context-based interpretations on my example Love and Career reading pages.

3 thoughts on “How To Tell A Story With Lenormand”